Although reports about international trade are commonly put in terms of one nation's balance with another, in reality those balances are made up of millions trades made by individual merchants and manufacturers. Sellers wish to be paid for their goods in their local currency, and buyers wish to pay for goods in their local currency. In the past, both currencies were easily exchangeable for gold or silver, so the mechanism of international trade was somewhat simpler than it is now. Today, however, the mediation that precious metals once provided is accomplished by banks, exchanging currencies according to their values as set by international currency markets.

A nation whose exports are in demand would expect its currency also to be in demand, for foreign buyers would need that currency to buy those goods. This fact accounts for a natural equalization process in international trade. For example: If Australia has a trade surplus with New Zealand, there will be a greater demand for Australian dollars, so their value will increase. New Zealand dollars will then decrease in value. Now, New Zealand's exports, which have been produced at prices based on New Zealand dollars, will be a bargain when they are sent to Australia. Thus, the trade imbalance will reverse; New Zealand will eventually have a trade surplus with Australia, which will lead to higher demand for its currency. This see-sawing process will tend (all else being equal) to even out trade imbalances over time. 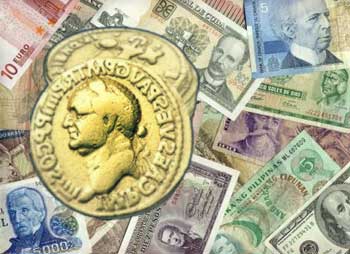 However, other factors can influence this process. The United States, for example, has run trade deficits for more than three decades. The US habitually imports more goods and services than it exports. Does the US simply have to borrow the money to make up that deficit, year after year? Is that why the country is so deeply in debt?

It's important to distinguish between two things that are often discussed in the same sentence: the trade deficit and the US Government's budget deficit. These things interact, but they are very different. The trade deficit is simply the amount by which the annual value of imports exceeds the annual value of exports. When the US runs a trade deficit, say with China, it means that after Chinese consumers have bought all the American goods and services they want in a given year, they still have some US dollars left over. If the Chinese investors traded the dollars for their own currency (Yuan), this would increase the value of the Yuan relative to the dollar. This would mean that the prices of Chinese exports would get higher in the US, which the Chinese manufacturing industries certainly don't want. Instead, the Chinese buy US treasury securities -- bonds -- which are essentially loans to the US government. So, the trade surplus supplies the US government with a ready source of low-interest loans which help to to finance its annual budget deficits.

There are also other goods and services that the United States provides the rest of the world that, while they don't show up in the balance of trade, do function economically as additional US exports. Henry George writes in Protection or Free Trade that processes other than trade, such as rents, inheritances or remittances sent abroad, add to a country's exports. The United States has two large categories of "export" that balance its tendency to import more goods than it exports. One is its military might. US maintenance of military bases in Europe, Japan and many other places, particularly in its mission of defending shipping lanes in the Pacific, is an expense that other nations, therefore, need not undergo. Also, the US dollar serves the function of an international reserve currency -- the main currency in which international goods such as oil or gold are traded. This means that US buyers can purchase such goods at slightly lower prices than those in other nations, because they do not first have to obtain the currency they must use to make the purchase.

In addition to its function as a reserve currency, US dollars also function as circulating currencies in a number of countries. The US dollar is legal tender in Ecuador, El Salvador and East Timor, but it circulates unofficially in many others. It is estimated that at least two-thirds of the US currency now in circulation is used outside the borders of the country.

These factors show how the United States can actually benefit from running a trade deficit for long periods. On the other hand, there are a number of countries in the world that maintain trade surpluses year in and year out. Many of these nations are developing countries that have large foreign-debt burdens. In order to service their debts, they must continually export more goods than they import. But these "favorable" trade balances do not bring these nations any improvements in living standards; it merely allows them to continue functioning in the "global economy." If their trade-surplus revenues were to be invested in schools or infrastructure, their creditors would lower the boom on them, and trade sanctions would immediately shut down their export markets.

China's case is somewhat special. It is supporting its rapid transition from an agrarian/socialist to an industrial/market economy with rapid growth led by export industries. China's economy emerged from its communist isolation with a currency that had a low value on international markets. As China's industrial output rose, one would expect its currency to rise in value as well. It did so -- but not nearly as much or as quickly as it otherwise would have, because the Chinese government pursued a deliberate policy of undervaluing it. By investing trade-surplus revenues in US currency and US treasury securities, it could keep demand for the dollar high, and demand for the Yuan relatively low. Estimates vary, but the Yuan's value stands at between 15% and 30% less than it would have been without such interventions. This makes Chinese exports very attractively priced in other countries, especially the US.

| Protection or Free Trade | Back to Lessons | Site map |