is a much used and misused term. The word was coined around 1830 to indicate any doctrine that tries to rationally organize economic and social life. The American Heritage Dictionary offers two definitions: 1) ōA social system in which the producers posess both political power and the means of producing and distributing goods.ö and 2) ōIn Marxist-Leninist theory, the building, under the dictatorship of the proletariat, of the material base for communism.ö In its most frequently used sense, socialism is a system of social or governmental ownership and control of the means of production. Marxist theory teaches the coming of socialism through class struggle and revolution, in preparation for the final historical stage of ōcommunismö, in which all private property and other vestiges of capitalist production are abolished. Socialism is usually discussed in opposition to ōCapitalismö. Normally that is taken to mean a system in which the factors are privately owned and economic decisions are made by a market that is free of government intervention.

In the hysterical political climate that characterized the cold war, the meanings of these terms tended to become squashed under the excessive ideological weight that they carried. Each ōismö became identified with the diabolical plot of an enemy. Meanwhile, their use to describe economic policies was by no means clear, as ōfree-marketö economies developed more and more ōsocialisticö government programs Ś and ōsocialistö economies granted more ōmarket freedomö to producers. Eventually the terms came to have about as much ideological content as the names ōRed Soxö and ōWhite Soxö.

But the term ōsocialismö does mean something, and it is often identified with the quest for economic justice. The basic assumption underlying it is that the market place, under conditions of laissez-faire competition, is incapable of securing to society an equitable distribution of wealth. Socialists assert that if the market is left alone to decide who is to get how much of the worldÆs goods, the result is a division of society into classes and the emergence of a struggle between the exploiting class and the enslaved working class. Competition becomes ōcutthroat competitionö, fostering trusts, cartels and monopolies. Instead of making earnings proportional to service rendered, the market place gives the highest rewards to the most unscrupulous exploiters.

However, many are proud to rally behind the banner of ōcapitalismö. They contend that free competition makes the fullest possible use of the gifts of nature and human ingenuity. When the admirable efficiency of the market is hindered by do-gooders trying to secure their idea of fairness, the result is unemployment, stagnation and corruption.

Capitalists and socialists may appear to disagree about everything Ś but on one crucial point of political economy their views are uncannily similar. Both tend to lump land and capital under the single heading of ōcapital,ö and many even include money as capital. This confusion prevents socialists from seeing the possibility of a beneficial free market without the element of monopoly. And it prevents capitalists from seeing the fundamental role of the public sector in a just and prosperous market economy. 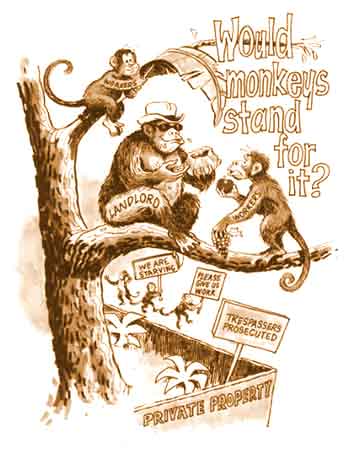 It may seem odd that both ōcapitalistsö and ōsocialistsö speak of the justice of their system and the vile in-justice of their opponentsÆ. (Of course, the emotion behind such discussions is often heightened by a kind of home-team fervor.) Is there any universal standard of justice upon which economic policy can be based?

The answer lies in clarifying the question of the rightful basis of public vs. private ownership. For the thorough-going free-market capitalist, ōpublic ownershipö of anything is anathema: the communityÆs interests are best served by the unhindered interactions of self-interested producers and traders. But the poverty, suffering and environmental destruction that come under such a ōprivate propertyö regime cannot be denied. Because of this, the great bulk of social-policy debate revolves around how much of the efficiency of free enterprise must be traded for public interference, imposed in the name of equity. The question of the rightful balance between public and private control becomes one of expediency and political fashion, lacking any guiding principle. Indeed, modern neoclassical economics denies that any such principle exists.

In recent years, this understanding of the distinctive character of natural opportunity (land) as a factor of production has led to the coining of a new term: Geoism, indicating a philosophy based on the rightful understanding of the place of the Earth (Geo-) in economic life.

| Protection or Free Trade | Back to Lessons | Site map |